This ECU must be worth a punt if I find you here too, Peter!

I like Stevie and Pavlo's method of ECU control so far, sounds more controllable and as though it would atomise better than PWM pump control and a fixed nozzle.
Top

I guess other option is instead of a solenoid and separate nozzles...

if you could rig up a large methanol compatible injector ( if injecting methanol ) and just fire it via the ecu as per secondary injector. eg 1000cc or so depending on how much you need.

If water is involved, the Aquamist etc solenoid and separate nozzles is probably best as it's intended for water use.
Top

Volvo won the 1985 TC championship here in Australia with such a system.
Though it was 4 injectors (double up of petrol system) with specific tank, ECU and so on that used water with soluble oil *machining lathe/mill* and conventional injectors. All normal EFI fuel system parts.

All been done a long time ago

Mark_r33 wrote:This ECU must be worth a punt if I find you here too, Peter!

I like Stevie and Pavlo's method of ECU control so far, sounds more controllable and as though it would atomise better than PWM pump control and a fixed nozzle.

These ECU's are great, preferred over Pectel, I only went with the MQ12 cause I got it new/cheap of someone who could not use it. I rekon Syvecs should swap/sponsor me a new S12 for it

since its better suited to rotary engine applicaitons.

Happy to share on WI knowledge (hope its not too boring for people)??? remember mine is my own knowledge base since 1995 when I first started running such systems.
I run WM50 (50% methanol 50% water) by mass.
I use this as it offers the best performance (power output) without knock limitation.
On the WM or water control method, I have found over experience that the amount (so long as you meet the maximum output criteria) is non critical, that is to say that it is ok if you oversupply the qty you need to meet your performance level requirement, so therefore you can over administer the amount you require with little ill effect sans the fluid usage amount which tends to be non critical for drag racers, or short duration events.
So it is totally acceptable in my experience to run a fairly simple system. When combined with a simple delivery method (like a pressurized canister for example) you get a system that will be very good while over injection (on non sequential application) in the mid range of about 15% but correct amount in last 1/3rd of rpm range.
Again the specifics are in the detail and understanding of the relationship between excess fuel ration and WM or H20 injectant qty. If you have a good ignition system the window of operation is large and the losses of power are minimal, so if ultimate fluid usage or economy is not a problem for you then you can get away with running a technically very simple system indeed.

I've supplied such systems to people for a long time now and the proof is in their results and reliability. Note: it is very easy to use the 'simple' method and drive it off a PWM and 'map it' some chose to do this, though in most cases it is not required, some applications need this fine tuning though. Also worth metioning this system applies only to pre turbo injection location, which I only use for various performance reasons, I don not believe is injection in the manifold, I have never measured a consistent performance gain (VBOX3i analysis) when using other than pre turbo location, so I dropped that line of development and stuck with the pre turbo location.
http://www.riceracing.com.au
Real turbo road cars fast > reliable > durable
Water Injection Specialist
Top

The WM50 does change the AFR the engine runs, the simple way without over complicating things (even on ghetto ECU) is calibrate it first on pure water injection to within 0.1 AFR of the target AFR table.

Then simply run the basic RRWEP140 WI system as described with the WM50 mixture and just account for the methanol content in the Target AFR table till it pulls the same AFR out on the track/road as what it did with the water only set up (video attached) this is one I did a couple of nights ago, being set up on low boost of 1.2 bar checking 80kmh to 180kmh in 3rd gear. I can't wait to get my Syvecs S8, and will set mine up with a dedicated PWM table, once I work out how to do it under the existing Water Injection strategy !

^ Forgot all about this, here is link to Aquamist integration into Syvecs/LR.
It's what I use on all cars (more details in link above) 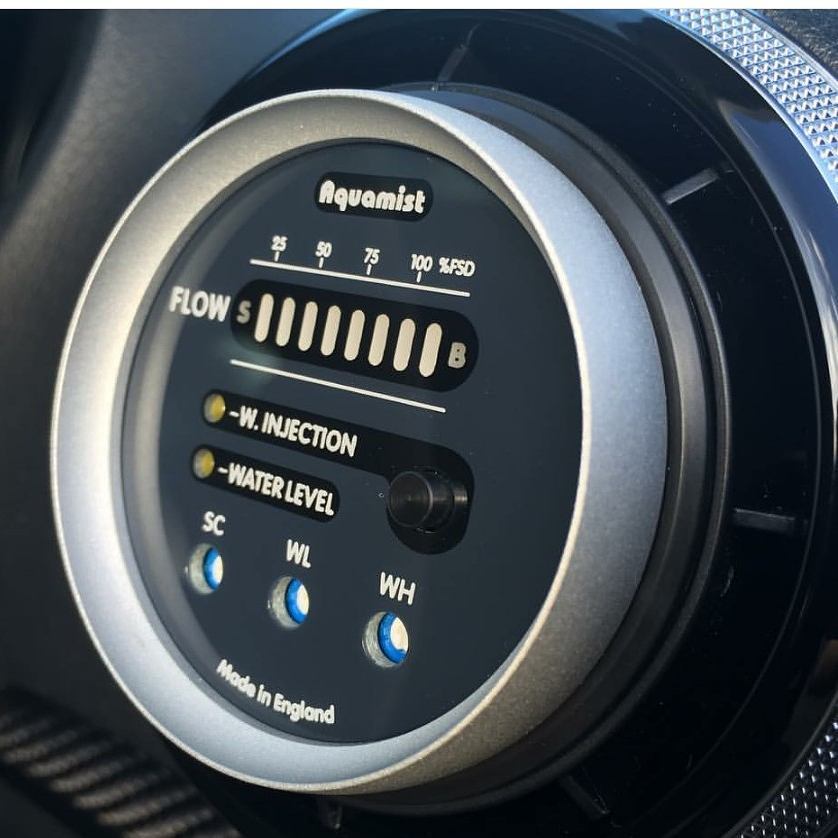 tarmac terror wrote: ↑Mon Aug 19, 2013 10:43 pm Been giving water / meth injection a closer look of late and am swaying towards an EMS-based system fromCoolingmist.
I have searched for info about these systems on here but the only relevant stuff I could find was from some time ago...

My question is this...with an S8, could I have the ECU directly controlling the pump via PWM? The Coolingmist blurb states:-

I'm sure the S8 can output an easy 10-13A on a spare injector output and can take an input for a float sensor for low water level. The last recommendation I found (albeit a while ago regarding an Aquamist system) said that it would be best to keep the supplied controller and leave the ECU out of the equation. I just feel that it would be a neater, more integrated solution to have the S8 manage the pump directly and giving it sight of low water/meth levels so it could apply measures should the fluid run out.

So, do you still recommend using the supplied controller or would you say that control via the S8 is better??

On the S8 I use Aquamist products and they are fully integrated as in below examples (many different car types shown, all on Syvecs/LR and Aquamist) One common denominator is they all still run

and are fast. Only rotary 13B in the world as a road car that is doing so too

lots claim it, lots facearsebook about it, very few to none do it

Only limitation is the turbocharger, largest EFR is too small (run well over speed limit reliably), only possible with Syvecs and water injection though !

Peter, are you still always preturbo? mentioned earlier in this thread.

- do you think 100% water preturbo would cause more or less compressor wheel damage? What have you learnt the key aspects to prevent compressor damage?
- do you run no intercooler?

^ no, all systems these days are Aquamist based as they are integrated in the Syvecs better.
Don't do any pre turbo for a long time now.
Other stuff you can read on Aquamist site talk about it at length there mate.
http://www.riceracing.com.au
Real turbo road cars fast > reliable > durable
Water Injection Specialist
Top

We are working on getting the Syvecs to do full control of the water injection components (specifically flow meter/s), so there will be no need to use third party controllers.