I tried the new launch control parameters out on Saturday, and it was absolutely brilliant.

Can it be improved though? Have a listen.

listen to the silence.....the datalogs and your 64ft time.

Only way to see if you can improve, is with that information and testing other settings.
Top

I might have five minutes spare tonight to start going through the logs Stevie. The MBE guy was at Combe and we had a brief chat about the settings I was using, and I've some ideas now on how to improve it.

I'd set the slip to 10% all the way to the L/C cut off point (40mph or 6050rpm) and of course, when 2nd gear was selected the ECU was still showing 10% wheelspin and that caused traction events. So I'll change the L/C to reduce the slip gradually over the vehicle speed breakpoints, until it reaches 0% at the L/C switch off. I'm also going to increase the slip overall, to see if the increased wheel speed reduces the tramp. The calibration switch allows me to range the launch RPM from 2500 to 3500 in 100rpm steps, and I tried 3000 & 3100rpm, but didn't have any more runs left to keep trying the higher settings.

My 64ft times were about 4/10 slower than the quickest launch that the MBE cars were achieving (2.1s) but I'm sure we can match that in time.

Regarding the vehicle speed breakpoints, should I use a linear or non-linear scale for 0-40mph for the 11 set points?
Top

I dont really think it will matter whether linear or not.

But for me, linear makes it easier to set the slip levels so just makes more sense.

Also, hard to compare other cars, other drivers etc....because the driver still plays a big part. And as mentioned before, being easy on the clutch can make a huge difference to launch if you can prevent breaking the tyres free badly in the first place.
Top

I've changed the settings to gradually reduce slip down to 0% and I've noticed the autoshift from 1st to 2nd happens at 6000rpm so I've set LC to finish before just 6000rpm/40.1mph otherwise the gearshift at 6000rpm might confuse things. I can't adjust the autoshift rpm unfortunately.

I might try a softer clutch release at Anglesey.

I have noticed in the logs that the front wheel speeds initially lag about 1second behind the GPS speed. So as I accelerate, the rear wheels are spinning at 20mph, the GPS Speed climbs from 0mph, and its 1s before the front sensors start to register a speed. After 1s they show the same speed as the GPS Speed. They've 8 holes in the sensor pickup wheel, but I suspect the front wheels might be lifting off the ground, and not spinning at the same rate that the car is moving. So for the 1st second of launch, the ECU isn't getting any useful speed data from the front wheels. I guess there's not much I can do about that. I've read GPS speed isn't always reliable. Vehicle Speed is set to MAX front. Does anyone run GPS instead?

I don't know if I'd run the target right down to 0% slip, have a look at your logs and see what slip % it reads when on full power in say third/fourth properly hooked up, I'd imagine even without wheel spin it is >0%?

Could you spin a front wheel by hand and watch for the ecu registering low speeds? That would tell you if it is genuinely the wheels lifting or if it is simply that your inductive speed sensors (I assume?) don't produce enough voltage at low speed / your trigger thresholds are too high in the ecu?

Could you sort out the auto upshifts with a wiring modification?

Almost impossible it is the wheels lifting.

It'll be the wheel speed settings most likely.

And yes, 0% slip would not really be practical.
Top

10kph, 8 pulses per revolution, 2m circumference tyres (235/45x17 or thereabouts) only produces a 10Hz signal. I'm not surprised you don't get much of a reading. Wheel speed sensors - from my theoretical POV, not practical experience - would not be good for low vehicle speed measurements.

A 50Hz update-rate GPS would be better, but obviously needs time to acquire the satellites, and a view of the sky - modern GPS receivers are pretty darn good though (and work inside our metal-roofed unit which always amazes me!).

TimH wrote: ↑
Wed Mar 27, 2019 9:07 pm
10kph, 8 pulses per revolution, 2m circumference tyres (235/45x17 or thereabouts) only produces a 10Hz signal. I'm not surprised you don't get much of a reading. Wheel speed sensors - from my theoretical POV, not practical experience - would not be good for low vehicle speed measurements.

A 50Hz update-rate GPS would be better, but obviously needs time to acquire the satellites, and a view of the sky - modern GPS receivers are pretty darn good though (and work inside our metal-roofed unit which always amazes me!).

Use 1 tooth per reading....8 pulses per revolution, each pulse will be approx 10" per tooth for the tyre above.

No issue on mine to over 200mph, and speed reading is useful from around 1ft ( which is handy for comparing to Santa Pod times etc, incl 60ft. )

And no need for satellites

Although gps/accel data is also very useful too, to gauge your accel throughout launch and other times etc.
Top

The ECU/GPS module would be on for minutes before we line up and do our runs on the track, so shouldn't have issues acquiring satellites.

This is from the two run off runs on Saturday. It shows the delay between the rear and front speed sensors producing data. 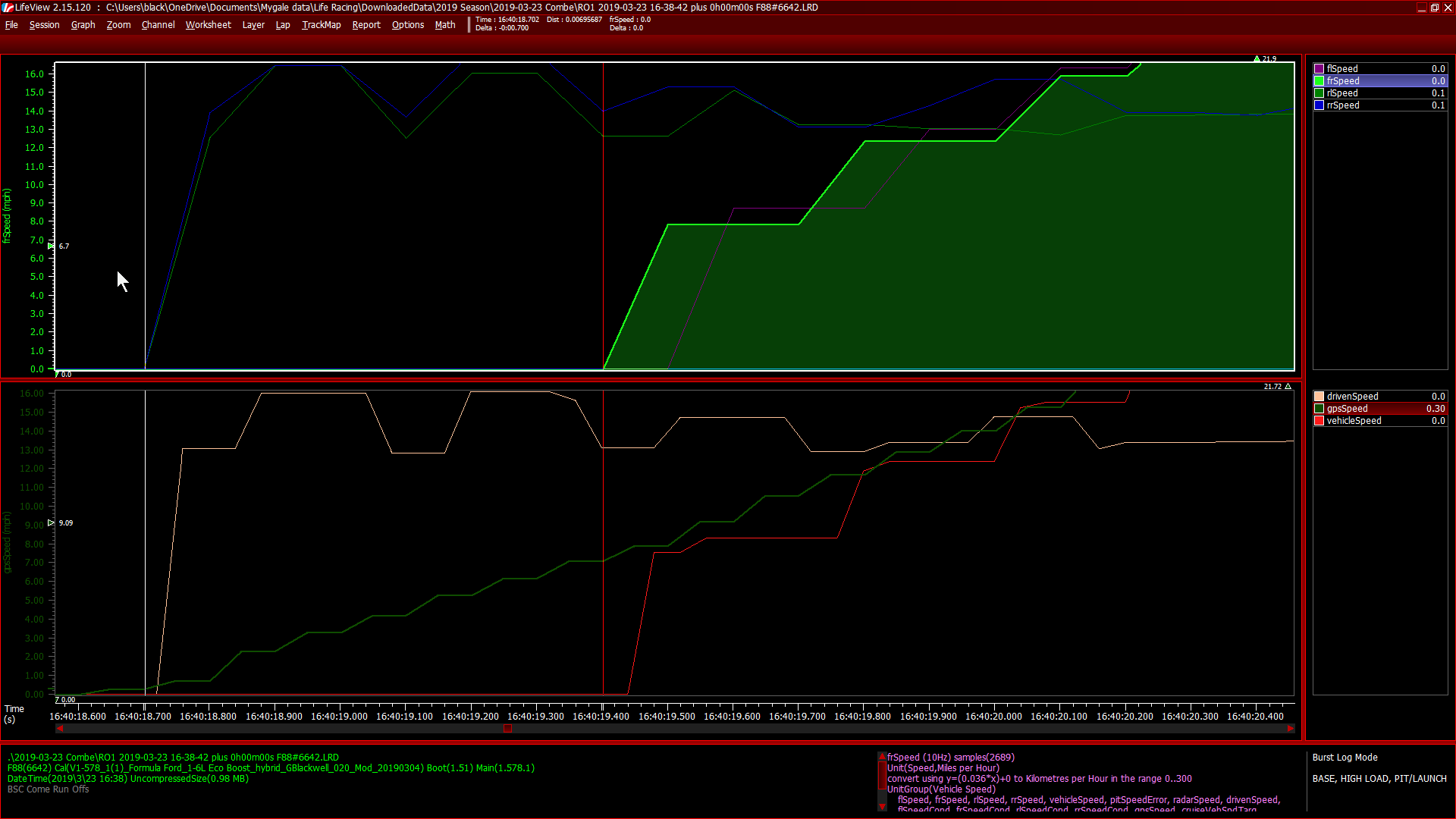 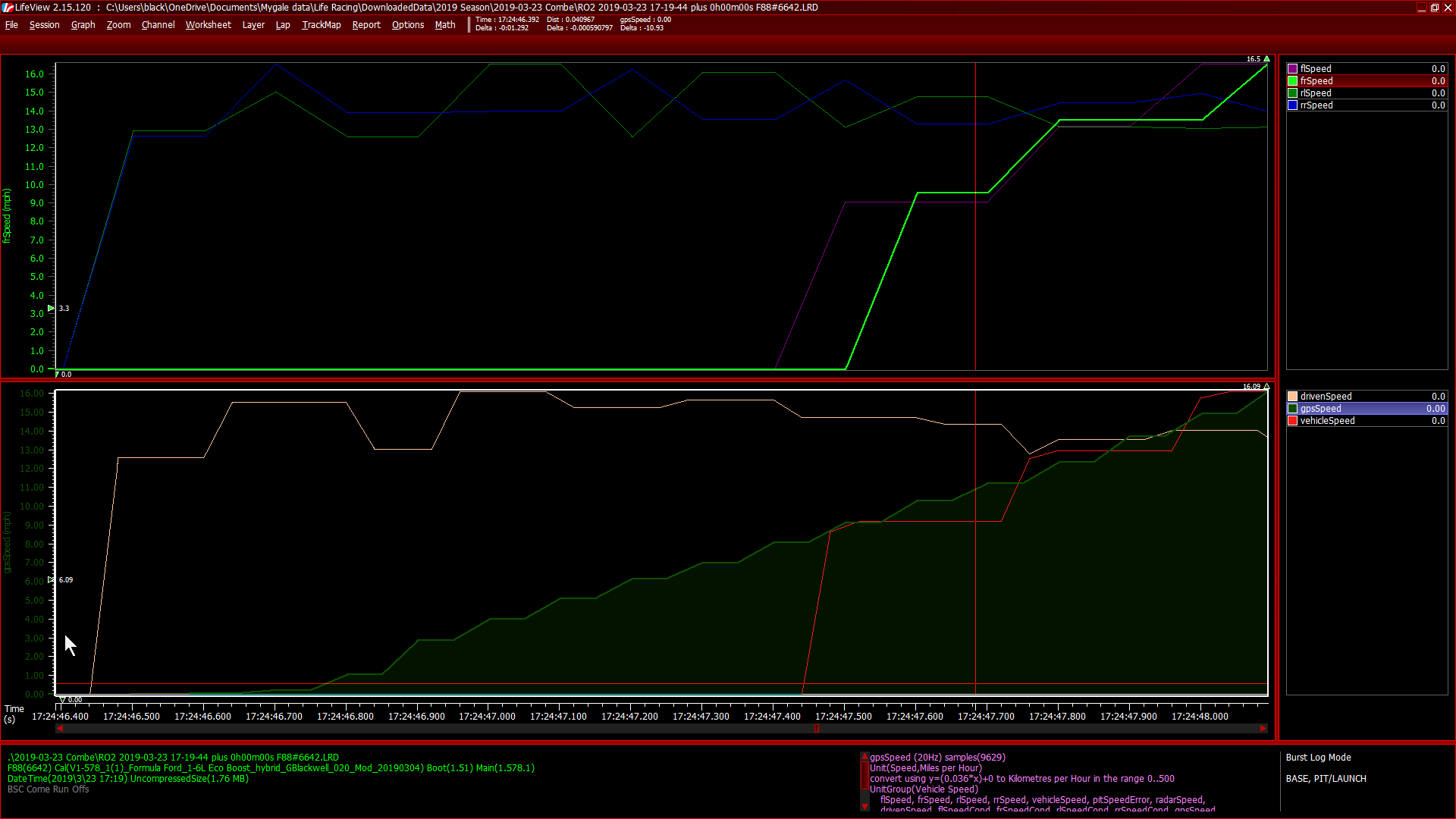