MY00 GC8 with AVCS don't start

MY00 GC8 with AVCS don't start

All is now in the car but it don't start for the moment... Starter is running, but enginde don't fire up

I have no errors with the syvecs, Pin assignment seems correct but I can't understand what's happen. Probably a dumb problem again, but I would appreciate some help You'll need to give more details than that.

Has this ever started and ran correctly ?

Is the ecu in a state where it can start ? Does engine even turn over ?

Give us some information.
Top

This is my first attempt to start the engine which is brand new. It never fired up before.

Fuel pump is priming
Starter is running,
Engine is turning
But nothing happen.

Injectors are ID1000 brand new.
I've used the calibration given by ID in the map

Spark plugs are NGK PFR7G brand new too.
Ignition coil are used ones, and were supposed to run on the previous engine which was not this one and not mine.

My Cal switch is not wired in for the moment

Are you actually connected to the ecu and have a green light ? Or are there errors of some sort ?

When cranking, do you get an rpm reading ?

So, ECU is welle connected, I have the green light, no problem
No Erros appear when I go "Device / Errors" it's clear

I add som gauges for crank / cam / rpm
It seems I have no crank signal, it stay around 5V, no signal visible
I have cam signal, I can see the trace.
RPM Don't vary so much, I've modified the scale of the gauge to get 1.000 rpm instead of 5.000 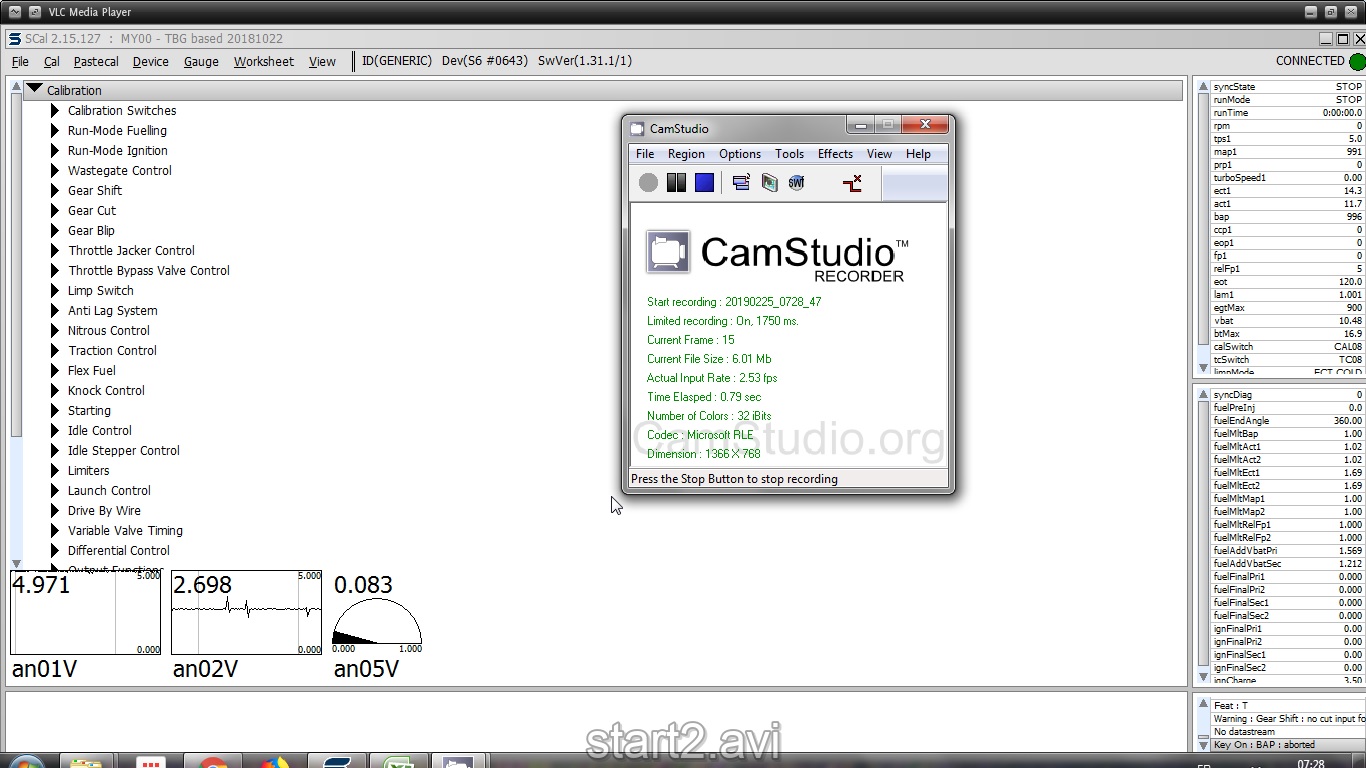 What does the syncscope say ?

That will let you see what the crank/cam signals are like.

Also, in your I/O you have VVT cam signals assigned....clearly not normal for a MY00 GC8. Although shouldnt affect starting.

So is this calibration suitable for your engine ?
Top

So, I spend some time on the crank issue and finally I think I found the problem, by chance.

It's located just at the end of the connector of the crankshaft sensor.

When I pulled on one wire of the connector of the crank sensor, I felt a strange feeling on the orange wire.

Finally I found that the copper wire was cut inside wire of the Crankshaft sensor. It broke inside the plastic layer of the wire, so the wire was just a "plastic tube", copper wire were were no more connected, so no signal. I checked the continuity between ECU plug and crank sensor wire and all is OK until the connector of the sensor.

I noticed the same issue on my spare wiring loom, the wire are almost cut just after the connector, at the same location. I think the problem is linked to the sharp angle made by the wire after the crank sensor connector.

I'll use my spare engine loom to repair this connector.

Stivieturbo, just to confirm you that even if it's a GC8, I have now AVCS heads on the motor, from JDM Spec C, hence the VVT pin assignment.

I see this a lot on crank and injector connectors. I think it's because they are awkward to get to, so people pull on the wires when trying to disconnect the wiring. That breaks them, especially on what are now at least 18 or 19 year old looms!
Top
Post Reply
23 posts